Our species clings to the concept of ‘Human’ because it provides an easy, relaxing and affordable sensation of superiority over other sentient beings. But the schism between human and animal (we share 98% genetic similarity with chimpanzees) is not only artificial but dysfunctional. Calling a pig that has been kidnapped, tortured, slaughtered, packaged and consumed after being grilled over burning coals a “hot dog,” for instance, stems from the same ego driven attitude that produces racism, bigotry, classism, elitism and warfare. In order to treat a pig so miserably, it must be viewed as an inferior creature. Likewise, when soldiers torture, they often resort to pulling hoods over their victims’ heads, stripping their clothes off and stealing their nametags. All the assassin knows for sure about their victim is that they are expendable. The less they know about their true personhood the better.

Relating this ugly sociological fact to the incomprehensible plight of non-human animals, it is known that each and every day millions of cows, chickens, pigs, sheep, goats, deer, and fish are murdered in dark, cold, sound-proofed death chambers in the name of political and cultural duty. Even the weapons used in so-called “factory” farming are eerily similar to the ones used in military combat. It seems at times the tactics and strategies employed in the slaughterhouses can be much more gruesome than the ones experienced on the battlefield. In both cases, the assassin does not want to know anything meaningful about their victim. They do not want to know their hopes and enjoyments. And they certainly do not want to know if they were loved. They need to not want anything of value from them at all. This is one of the hallmark signs of power: the ability to not care if or how someone dies. How many hunters and butchers stop to think about a pig’s family, consider its’ memories, or contemplate its’ favorite spot in the sty? How many employees in slaughterhouses think about the preferences of cows or try to ponder the intrinsic joy of being a sheep? Before the ax falls, the arrow flies, the needle plunges, and the stun gun fires its deadly shock, who stops to ask themselves if they would want this heinous act done to their mother, husband, best friend, or child? Perhaps Nietzsche was right when he said, “Man is the cruelest animal.”

And how do millions of consumers turn their moral attention away from the nameless creatures in those genocides that never make the evening news? As soldiers dehumanize their enemy by using derogatory names such as Jap, Kraut, Commie, Infidel, and Terrorist, consumers invent euphemisms such as ‘Big Mac’ and ‘ Sirloin,’ objectifications like “wings,” “thighs,” and ‘breasts,’ and even slurs like “Bessie,”  “hog,” ‘dumb ass,’ and “Billy Goat.” For without these linguistic acts of self-deception, it would be literally impossible to stomach the tragedy. 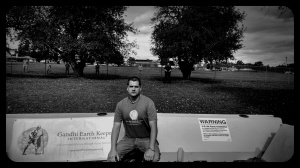 George Payne is the founder and director of Gandhi Earth Keepers International in Rochester, NY.