Preface:  just-do-something.org was introduced to Orla Mannion via LinkedIn, when someone else mentioned this particular Blog, below.  It touched me, as so many writings do, and I reached out to Orla asking if we could post her blog on our website.

When I first created this blog, I had plenty of ideas in mind as to what I wanted to write about. Politics, current affairs, travelling, recipes, the environment, animals, magic – and these are all things I still want to write about. But what has really pushed me into finally writing something today, to reach out in some medium or form, is a picture I just saw on a social media site.

It’s a picture of two cows, comforting one another, before being put to slaughter.

It has moved me, shaken me, and sickened me to my core all at once. It has reminded me why I have given up eating meat, while in the recent past having considered myself to be something of a hefty carnivore.

While still what I’d call a fledgling vegetarian, and still relapsing occasionally by eating chicken or fish (although these occasions become evermore infrequent), I have not eaten beef or pork for at least the past five months.*(Quick edit: I am now a fully fledged vegetarian, working my way towards becoming a vegan, having almost totally cut down on dairy intake. Next step, eggs! And the whole thing is surprisingly easy!) And every time I want to revert, every time I begin to feel lazy with it, or begin to allow myself to normalise the idea of eating meat again, I am exposed to something that awakens inside me this horror, this absolute bone deep despair, this anger; something that brings it all home again. And this time, it was the picture of two cows looking deep into each others eyes, offering comfort to each other over something that we will never understand and will always be excluded to, showing in them a depth of emotion that we repeatedly fail to acknowledge.

Why are we so cruel? So shamelessly callous and purposefully oblivious to our obvious shortfalls, as human beings, where we allow ourselves to be surrounded and tainted by suffering. As human beings, we owe a duty of care to the animals we consume. Contrary to popular belief, the meat you buy in a supermarket does not arrive there straight from a factory, all cellophane wrapped and ready for easy consumption. That meat you’re eating was a someone, not a something. It had emotions, feelings, relationships with other animals, possibly people, given the opportunity. Cows are known to be highly sensitive and loving, with pigs being highly intelligent and clean and affectionate. I even learnt the other day that it’s possible to litter train pigs, just like cats.

We have this attitude concerning meat, this highly addicted and brainwashed attitude, that seems to create a guilt free pass to blissfully consume meat the way we do, to treat animals the way we do, that allows for them to arrive on our plate in a manner that doesn’t stimulate our thoughts to generate anything beyond what is right in front of us. Animals are given such little respect, treated so horribly, regarded as a product, rather than the living, sentient beings that they are.

People don’t like to look at the reality. But if you’re brave enough to open your eyes to understand fully the meat on your plate, and you decide to open your heart and begin to care, even a little, you’re more than likely going to end up having it broken. But the alternative is far worse, where you decide to be blind yourself and ignore the atrocities that are so commonplace around us, where the reality is that it continues and we all play a role in it. If everyone turns their back, or pretends not to see for the sake of protecting their sensibilities, nothing will ever change. I believe, that maybe in a 100 years time, people will look back and shake their heads in disbelief at how foolish, wasteful and cruel our generation has been. At least, I hope it does.

I have written this with tears of frustration. When I see photos like that, I feel like jumping up and down, like standing on some podium and shouting to the world to educate itself and change it’s ways, that we cannot sustain what we have abused for so long. And then I feel claustrophobic with horror, by the simple fact that so few people seem to care. I get this constant surge of emotion, where I want everyone to see and understand what is so relevant to all of us, what is so REAL. Just because they don’t have a voice, does not mean that we shouldn’t listen, or that we have the right to be complacent. Somewhere in the world, right now, there are new born baby calf’s being torn away from their mothers. Mothers taken immediately to give their baby’s milk to a machine. Bulls slaughtered. There are calf’ being locked in small dark spaces where they can’t move so their muscles are lean and soft (veal), there are pigs lying on dirty concrete floors giving birth to the next stock of meat, there are animals brought to slaughter houses, after leading horrendous lives; scared, afraid, distraught, lonely, and confused.

Maybe the worst thing about that photo for me was that the cows weren’t confused. They knew exactly what was going to happen, and had already quietly accepted that and were now awaiting their sentence, gently offering each other comfort in their final moments, as friends.

I just WISH the world would wake up. Realise what we are doing, and what we continue to fail in stopping. I just wish the world was a better place. Filled with people who cared more, who felt more, who saw more. People who would THINK more, and were just generally better human beings.

If anyone decides to read this and wants to see the photo, here it is: 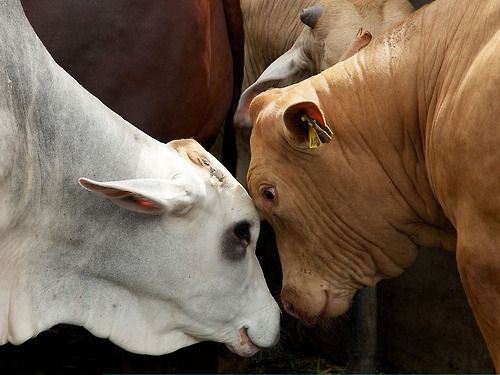 – My name is Órla, I’m a nineteen year old student studying Economics, Politics and Law in DCU, a University in Dublin. I live in the countryside and have four rescue cats, a rescue dog and rescue chickens! 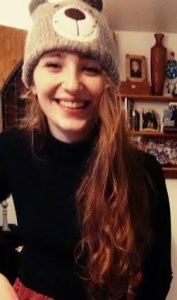