5 Reasons Why Everyone Should *ADOPT* A Shelter Pet 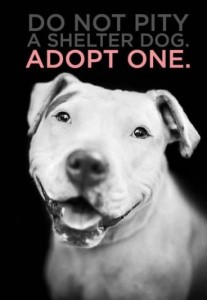 The glitz, glamour and prestige of dog shows and the glossy ads in dog and cat magazines suggest that buying a purebred pet from a store or breeder is the best way to go. Unfortunately, the pet industry has a dark side, and while some respectable breeders sell healthy and beautiful animals, many others are abusive. And even the healthiest baby animals are too challenging and expensive to fit some owners’ schedules and abilities.

The good news is, you can choose from a wide selection of animals at your local shelter to find your ideal pet without supporting bad breeding practices or taking on a responsibility and expense you’re not ready to handle. People give up pets for a variety of reasons including divorce, financial problems and the owner’s illness, none of which have anything to do with the pet’s temperament and health. Whether you’d prefer a mixed breed or purebred, a young pup or an elder dog, a shelter near you probably has the companion you’re looking for. Plus, when people ask you where you got such a nice pet, you can proudly say you rescued them!

We’ll start with the basics. While the no-kill movement is gaining momentum nationwide, 2.7 million (MILLION) dogs and cats are euthanized (THAT’S KILLED) in U.S. shelters every year because more people surrender their pets than adopt from a shelter and limited resources force shelter staff to make difficult decisions.

Sadly, Pit Bulls make up nearly half of the dogs in shelters, so adopting one would be a great kindness. But if that’s not your preference, it won’t take long for the pet of your dreams to come in. After all, those surrendered pets have to come from somewhere, and that includes “impulse buys” from breeders and stores where most people purchase pets. So if you really love purebreds, it makes more sense to check the shelter first and save one’s life.

No matter how neat or messy your house is, no one wants to live in or clean up animal filth. It takes a lot of time and patience to train an animal to ask to go out or use a litter box, and in the meantime smelly and disgusting accidents are inevitable. This training period can’t be avoided with a new puppy or kitten, but many shelter pets have already been housebroken (shelter staff will be able to indicate which ones). This includes young animals who still have a full lifespan ahead of them.

3. Find the Right Companion for Your Lifestyle!

Everyone should be able to benefit from a pet’s companionship and stress-relieving benefits. Still, young dogs need a lot of training and exercise, which is a challenge for any owner and practically incompatible with the lifestyles of seniors and busy professionals. Luckily, shelters have an abundance of older dogs who already know basic commands, have lower energy levels and will behave well without constant monitoring.

New pets from reputable breeders can cost thousands of dollars. Even the worst breeders charge a lot because they’re only after the easy money. Friends and family members might give unwanted animals away for free, but that leaves you with expensive costs including spay/neuter, vaccination and microchipping fees.

Most shelters charge a modest fee to adopt a pet, and this typically includes sterilization and veterinary care.  If you adopt a mixed breed, you’ll save money in the long term, too, because hybrids tend to be hardier than purebreds. All in all, it’s a better bargain than any of the alternatives.

Some breeders truly love their animals and care about producing the healthiest and best-tempered pets. When you purchase a pet from a store, however, there’s no way to tell where it came from. Bad breeders are like a cancer, advertising their animals everywhere from pet magazines to Craigslist to newspapers, making false claims,  offering no support for buyers after the purchase, and most importantly NOT taking care of the dogs and litters they are breeding. Why take a chance supporting an abusive scam artist who abuses and neglects their animals to make a buck, when you could rescue a pet from a supportive, caring shelter instead?

Support a shelter, save a life!

END_OF_DOCUMENT_TOKEN_TO_BE_REPLACED

Genesis 1:26 – And God said, Let us make man in our image, after our likeness: and let them have dominion over the fish of the sea, and over the fowl of the air, and over the cattle, and over all the earth, and over every creeping thing that creepeth upon the earth.

We’re good, but we could be a lot better

There are many things for which we humans can be rightfully proud of ourselves. We have made remarkable discoveries, and have learned how to live longer and with less hardship than our ancestors could have ever imagined. But there are also areas of our lives for which we have individually and collectively brought shame upon ourselves, not the least of which is our treatment of our fellow beings, both human and non-human.

How often do we see another being who is starving, frightened, sick, or suffering from abuse by another, and we turn aside and go about our own business without giving it a second thought?

The sad fact is that we simply fail to empathize with the suffering of animals. Perhaps we are afraid that by getting too close to them, that suffering, and that abuse, will somehow rub off on us.

Perhaps we’re afraid of getting hurt ourselves if we try to intercede when we witness another person venting their rage. What if that frightened dog bites me? What if that crying cat is diseased? So we close our eyes and walk away, eager to set aside any awareness of the pain.

Maybe we even tell ourselves that the victim is “just an animal,” and doesn’t experience suffering the way humans do. It is a comforting lie we tell ourselves, but it is a lie, all the same.

And at our core, we know it is a lie, but we convince ourselves to avoid the shame that we feel.

For unwanted animals, the odds aren’t good at all. Every year, millions of dogs, cats, horses, donkeys, and other animals are put to death for no better reason than that there was nobody who cared enough to keep them alive. Perhaps they were puppies that didn’t behave the way their humans thought they should. Some pets are guilty only of the “crimes” of growing old or becoming inconvenient. A few of the lucky ones get turned in to humane, no-kill shelters, where they will at least get enough food to survive, enough veterinary care to ease their discomfort, and enough attention to give them hope that not all humans are uncaring and cruel.

The less lucky animals get “rescued” by animal control officers who take them to the local pound, where they will be fed and housed for a few days, until either their owners or some hopefully compassionate humans come and retrieve them, or they are at least given a quick death, and their lifeless bodies sent to a landfill somewhere.

The least fortunate victims get taken somewhere far from the only home they’ve known and dumped at the side of the road. “They’re animals. They can make it on their own.” Another lie. Most animals discarded in this way either starve to death, get hit by a car, or get torn apart by predators. The ones who do manage to survive for any length of time experience the same hunger, fear, and loneliness that we humans would feel if we were discarded by those we love.

And they inevitably fall prey to diseases and parasites that tear them down slowly and make them even easier prey. There just isn’t such a thing as a happy ending for these animals unless, by some quirk of fate, a human passes by and sees their fear and their pain, and invites the animal to come into their family. Some animals hold to the hope that such a thing can happen.

You’ve seen them at the side of the road, looking at you and wondering, “Are you here to take care of me? Please?”

We humans believe that we truly do have dominion over the creatures of the earth, but we apparently forget what that actually means. It does not mean that we can use and exploit our fellow creatures. It isn’t license to vent our cruelty on them, or to deny them their needs, which aren’t really any different than our own. And it isn’t permission to just throw them away when they no longer amuse us or accessorize our lives the way we think they should. The greater part of dominion is, after all, stewardship. If we see another in dire need or suffering, our moral duty is to try to meet that need or end that suffering as best we can, not to increase it or turn aside and ignore it. But we must realize that the creatures with whom humanity has chosen to share our lives have grown to depend on us for so much, but that they have so much more that they want only to give back to us. First and foremost, we must realize that they feel joy and sadness, and kindness and cruelty, as deeply as we do. We have but to open our eyes and look into theirs, and we will know. And perhaps, one day, we will finally set aside the callousness that is our deepest shame.

Author:
Daphne Holmes contributed this guest post. She is a writer from www.arrestrecords.com (under construction – but please check out their blog page), and you can reach her at daphneholmes9@gmail.com.)