It started with a dog I would name Shawn; a dog that needed a chance but no one would give her one.

She was a feral dog, part of a large pack at one time but most had either died or moved on.

It was her time, she needed out before she started having puppies and adding to the already overwhelming population of feral dogs in Detroit.

I had sat back just watching a handful of rescue try and figure out what to do about her. It was frustrating; no one understood what she needed. There just aren’t any rehabilitation places for
feral dogs around Detroit.

It was out of that frustration I decided to switch my focus in rescue from mostly black dogs in kill shelters to feral dogs.

I knew feral dogs were very misunderstood, I also knew that they deserved a chance. If no one else was willing to give them one, I would.

Catching Shawn wasn’t easy but we did it. I will never forget that day.  It’s the day that changed everything for me.

Four years later Shawn is a permanent member of my family and she’s doing great.

That day I committed to feral dogs, to education and to opening up a farm where we could rehabilitate them in a safe, non-threatening way.

The most common asked question is “aren’t they vicious?”. That answer is simple. No. A feral dog is too fearful of people to ever willingly get close enough to bite.

That’s just one of the many misconceptions about feral.

The word “feral” does not mean aggressive or mean, it simply means “wild”.  A feral dog is a dog that has not had human interaction.  Think of them the same way you a deer, it’s a wild animal.

We tend to humanize our pets. We think every dog wants to be curled up on the couch next to us.  That’s just not true. Feral dogs see nothing wrong with the life they live. They don’t know anything different. Coming into our world is terrifying and confusing.  We speak a language they don’t understand, we move our bodies in motions they have never seen. Our pet dogs do use dog body language but it’s often very subtle.  They understand us so they don’t have to rely on body language for all their communication.  Feral dogs do not understand us and rely solely on body language. Their body language is very exaggerated but it’s also very clear. There is no need for words.

We use their language to start the rehabilitation process along with some help from really good food.

Because they are so fearful, we want every interaction with people to be very positive.

We start with food; all good things come from us. We keep it simple in the beginning, not asking much of them. 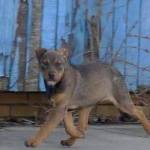 Shawn on the streets. 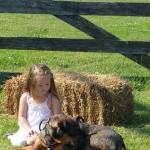 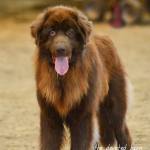 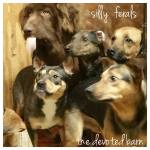 Feral Dogs at The Devoted Barn 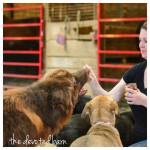 Feeding time at The Devoted Barn

Rehabilitating a feral dog is a process; it’s a rollercoaster ride at times. We take steps forward and backwards on a daily basis. It’s a very long process that can’t be rushed.

It’s hard to describe the feeling of earning the trust of a feral; the first tail wag is magical.

Feral dogs come in all shapes and sizes. Most often feral dogs come from once owned dogs that were left abandoned.  They will have a litter of puppies and without an owner; they will not get to know people. That starts the cycle.

Watching feral dogs can educate and help us with our domestic dogs. They teach us their language.

Our mission was to create a place where we could give these forgotten dogs a chance at a life inside a home with people. To learn to trust and to be loved, to have a chance to be healthy and to most importantly stop the cycle of creating more feral dogs.

We accomplished that mission and have had the joy of watching these feral dogs transition into family dogs. They are no longer forgotten.

I am a 42 year old single mother of five. I am the founder/owner of The Devoted Barn, I have been in rescue for over 20 years.  My mission was to open a farm where we could give not only feral dogs a chance but also animals from extreme cruelty and neglect.  We bring in at risk kids and adult special needs to help us with the animals to teach compassion and empathy.