In zoos, circuses, trekking safaris, logging camps and even in temples, captive elephants are ailing, many are fighting for survival. Around the globe, hundreds of campaigns exist to send elephants to sanctuaries where undeniable and often profoundly positive changes have been observed. But sanctuary is still captivity, it still requires the elephants to be managed, many require life long veterinary care, there are still fences, sometimes heated barns for cold winter nights. So, what’s the difference, what is the critical factor that allows these transformations, these – seemingly rebirths of a new being.

For decades it has been believed by those that work with captive elephants that what we see in their very limited environments is who they are. This is not the case. The negative impact of captivity has reduced elephants to only a small fraction of their potential and true state of being. One of the countless, but most pivotal lessons that came in the early years of managing an expansive natural habitat sanctuary is also one of the most basic elements of social psychology: we become what our environment allows us to.

I have personally witnessed elephants’ lives completely transformed by sanctuary. Elephant after elephant, sometimes with their first steps into their new home, emerge seemingly as a new being. We observed elephants unfairly labeled as killers become vulnerable and sympathetic, antisocial elephants become herd mentors, aggressive elephants turn passive and elephants on death’s doorstep live and thrive for more than a decade. But providing elephants with a healthier environment is just the first step toward healing and recovery.

If recovery were as simple as just providing a new environment, life would be easy. But we’re talking about an inherently complex species, whose captive lives are compounded by the complexities of trauma. Each elephant is as unique and as different as each individual human. They all have vastly varying needs and comforts. While some seemingly recover overnight, others evolve slowly, cautiously pealing away the layers of self-protective barriers they have built up through decades in order to survive. We’ve observed the gamut of pathways to recovery, and for a time we thought it was due to simply allowing them to return to the nature of being an elephant: letting them be with others of their own kind, grazing, exploring, playing, napping in the sun or under a shade tree. Undoubtedly these elements play a fundamental role, but over time the elephants showed us there was so much more to it than that.

We tried to encourage what we thought what was best for the elephants, but some chose a path that was essentially the opposite of what we assumed they needed. Flora was one of those elephants; an amazing being that taught us that the biggest growth comes when they are given the ability and control to figure themselves out. Flora didn’t want hundreds of acres to wander, and her apparent discomfort was conveyed in very demonstrative ways. After observing her for some time, we realized that it was not the space that was daunting, it was her inability to control herself – she lacked self-accountability. It appeared that she blamed others, the elephants, people and even the large space for her negative actions. Providing her a smaller safe space allowed her to confront the real issue. As time went on, and she was allowed to chose her own way forward, she eventually realized it was not the external stimuli, it was the anger she had inside, her own inner demons that were driving her actions.

To put this in perspective, most captive elephants have been captured from the wild at infancy. They are forced to submit through extreme dominance, put in a wooden crate and shipped overseas. Flora, was a result of a culling, where families were gunned down for population control, the infants were spared this fate. Instead they were sentenced of a life of confinement in a zoo or performing in circus. If this were a human, they would require psychological support for years, possibly even for life. These inner demons and deep-rooted anger are completely understandable. With Flora, we did the only thing that seemed right, to honor her desire and self-determined needs, even if they didn’t make sense. Because of this, we watched a remarkable transformation as she developed a greater understanding of herself. She learned to control her emotions by adjusting what and whom she exposed herself to. It was through these unexpected pathways to recovery that we realized that the principle factor for recovery is providing the opportunity for elephants to be autonomous. The most profound internal growth occurred when we trusted their voice and encouraged them to take control over the choices that made a substantially impact on their day, their comfort and their life.

Autonomy is not a requirement for life, but it is imperative for intelligent, social, emotional and intentional beings to truly live and thrive. This isn’t profound wisdom. It is fundamental animal nature. It is what we as humans desire, to be in control of our own lives. Out of all of the wondrous experiences I’ve had with elephants, reunions of old friend, unusual friendships, physical and emotional recoveries and transformations that make the elephants unrecognizable to former keepers, none are as incredible as seeing the moment when they find their inner-self, their true identity. When an elephant, taken from the wild as an infant, kept in essential solitude, judged and falsely labeled, realizes that they, for the first time in decades, finally have control over their own life. This is the true definition of Sanctuary and why we say that Sanctuary is so much more than expansive space, it’s a way of being that honors life, who elephants are and who they will become.

The future for captive elephant health is clear. It’s time to take everything elephants have taught us and share it to help provide captive elephants around the globe with a new life. We owe it to these incredible beings, the lives that human desire have suppressed, to finally give them the space, security and autonomy to be who they really are as elephants and individual. It is a solution; a healing remedy and a new dawn for a new life – it is Sanctuary! 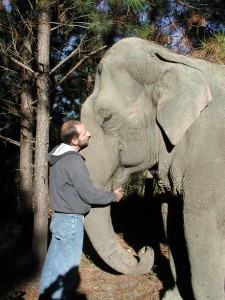 – Scott Blais CEO and founder of Global Sanctuary for Elephants