Birds versus Poles (From Janet)

For some people, this blog item may not seem like an issue, or even be worthy of a read. However, it’s the hard-core Animal Advocate in me that feels this is an important topic worth talking about, especially since I recently found out this EXACT situation happens a lot (A LOT).

This past week, we had a company telephone problem.

The telephone technician came out, and began his due diligence inside our office area. After trying a few things to no avail, he took his efforts outside of our building.

That’s when the trouble started.

After being gone for quite some time, he came back, excited to say he had “probably” resolved the issue – he found a bird’s nest, with two birds IN it, on a telephone pole. He said he shoo’d away both birds and tore the nest down.

And then he asked me to check the telephone lines again.
Yep – the problem was still there.
And yep – he had ruined a bird’s nest for nothing.

Thankfully breeding season is over, so there were no chicks in the nest.

I walked down the end of the street to see the nest myself.  Sadly, the nest was quite large, and had taken some time to build. With the colder weather coming, the birds’ concern now is to find reliable food sources to get them through the season – and now for this pair of birds, there would be an additional task of rebuilding their home also.

When I questioned his actions, his reply was a VERY sheepish, “Hey, I’m a telephone guy, and I do whatever is needed to keep the lines clear”.  When I asked him about tearing down nests in the breeding season, he just smiled and shrugged his shoulders.

To some, this may be a small thing.  But it really upset me.  So much so that I called the telephone company to talk about this.

Are there guidelines? Is there training? No. And no.

I was informed that our New York State has given telephone companies the right to “Nest Management” as the technician sees fit. Why? Because the priority of the telephone company ABOVE ALL ELSE is to keep the lines and poles clear of safety hazards and to ensure that the lines work as they need to. Anything that gets in the way of that is to be “taken care of”.

And THAT is the guideline AND training for that. Period.

The telephone company went on to inform me that they value life, and that their technicians’ values do not reflect those of the company, AND that they have no control over the values of their technicians, so many do remove nests without concern for what might be inside them. It’s a shame, I was told, but “there is nothing we can do about it.”

Really. There is “nothing they can do about it.”  Hm. 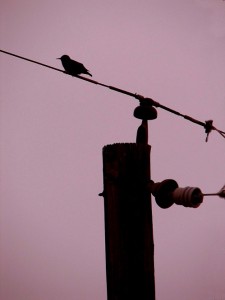 I don’t think I am done with this issue, because I think there IS something they can do about it.

Take a moment to call your local telephone company. I’d be interested to hear if that’s the same excuse you receive.

And then, I think there IS something we can do about it.

What do YOU think?

« Guest Blogger, Chris Ksoll (Dog By Dog Documentary)
When YOU Can Make It Better (From Janet) »
View more posts from this author