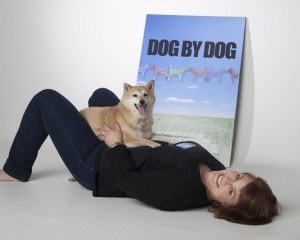 The Story Behind Dog By Dog; The Documentary

I am excited to be a guest blogger on Just Do Something!   The very title is something that has been a thread through my life but has really become the whole fabric over the past four years.

For over 20 years I have been in corporate America. I love my “day job.” It allows me the honor of helping entrepreneurs to grow their businesses. The people I take care of are nothing short of amazing. Being in a company, I also have a unique window in to how companies work and more importantly for this blog, how money trails flow, get set up and why.

When you are in corporate America, there are ways people interact with the not for profit world. You join a board, pledge money or volunteer.  For a long time, that is how my life was; I had a great job, served on boards and had 2 awesome dogs. One was a puppy mill dog, and he had a lot of issues, but I was committed to being his dog mom and working through anything that came up. Then everything changed.

One day my phone rang with an emergency call. I was asked to foster a mill breeder dog. I didn’t really know what fostering was and I was still not fully versed on puppy mills. The first time I set eyes on Kumiko, my life changed. I could not believe what I saw. She looked like a ghost. They told me she was in a cage for 9 years. Never let out. Bred every single heat cycle. No medicine. No human contact. Living on chicken wire. No love. She had worms, a tract infection, almost no teeth, no fur on her tail and bad fur everywhere else. Her eyes were squinty from pain. I made a promise to Kumiko that very first day I met her. I would Just Do Something. I would make change.

It took me a full year to figure out what I was going to do. While I was figuring out my strategy, I started connecting to rescue groups across the country on Facebook. I watched every program, film, and read every book. My friend Jordan taught me a lot. I started watching the whole chain. I needed to see who was in the industry as it was visible at that time. Patterns started to emerge. Then it came to me. This is a money trail. The money trail would map out all the vested interests.  After that, I had to figure out how to uncover this trail and how to get the information out once it was uncovered.

I also thought about how to reach people who are not necessarily concerned with animals and mills, but are moral people. Everyone knows what cruelty is. It felt like my brain was going to explode. How could I uncover the information, and make sure it could not be blocked. No agendas—that was really important. There could be no agendas; only the truth. Verifiable facts about a money trail. Then it finally hit me. I was going to make a documentary. That would be a no-agenda way to tell this horrible truth.

The next big decision was who to pick to make the film. My first criteria was that the person could not have anything to do with animals. This would ensure it could never be tagged as anyone’s marketing piece. Chris Grimes and 5414 Productions fit every criteria of my wish list. His award winning first film was about friendly fire in the military. Veterans are my second passion. That film had a tone that was factual, even-keeled but very moving. I never felt an agenda in the film. It told facts and I was able to come to my own conclusion. That is what I wanted. I will never forget the meeting with Chris, to ask him if he would consider making this film. His concern was that he was not an “animal guy” and I assured him that was exactly why he should do it. After he did some research, he came back and said the phrase: “Not only can I do this, I have to do this.”  Next to meeting Kumiko, this was one of the greatest moments in my life.

Thus began “The Journey For Change.”  We named the film Dog By Dog, because as Chris put it; “You are fostering and saving the mill girls and puppies dog by dog.”

The choice of Chris Grimes was as important as the choice to make a documentary.  My partnership with Chris has been one of the greatest teamwork experiences of my life. Our skills are complementary and I do know a lot about animal welfare and I had done a lot of research. Getting to Bill Smith of Main Line Animal Rescue and Bob Baker of Missouri Animal Alliance, to tell them what we wanted to do, just had to be the first thing we did to begin the journey. They were the pioneers of change. I wanted them to essentially bless the approach, method and goal. They both are important people in the documentary.

Fast forward four years. We have the film Dog By Dog. We are going around the country, showing the film and giving either half or all of the ticket sales to a local rescue in the screening city. We hope to be on everyone’s television soon!  The remaining funds from screening ticket sales are going in an educational fund to make Puppy By Puppy. It will be for kids. Let’s teach them early and let them change the future.

Just Do Something; those words mean a lot to me.

Note from just-do-something.org:
Education and awareness help.  YOU can help by bringing Dog By Dog to YOUR city or town!  Reach out to Chris via their Contact Page to talk about how you can make this happen!