For the Love of #Eloise

It started with this: 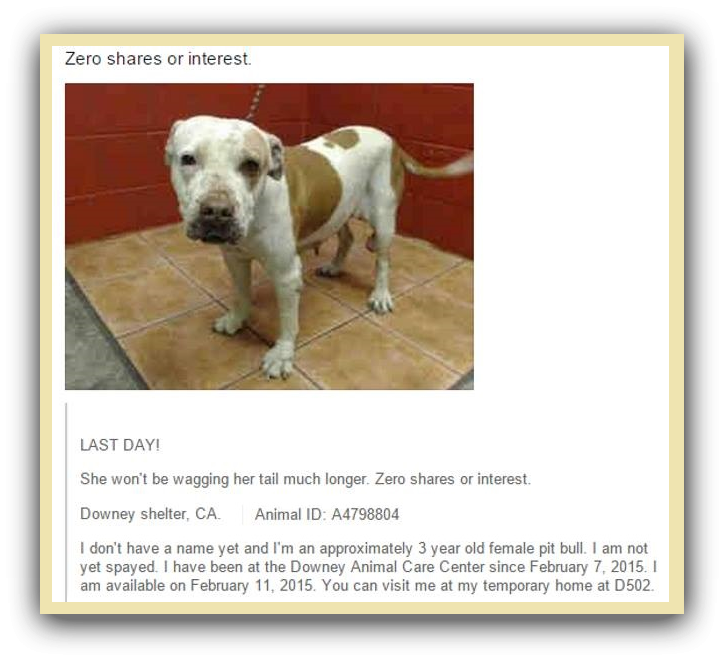 One small picture of a tired, worn, stray dog. Nameless.

I see hundreds of these kinds of pictures every day.  I receive them in my e-mail, they are posted in Animal Advocacy forums, they are part of Animal Petitions, they are shared by shelters and rescues.

Maybe it was the lowered ears, the way she looked into the camera, or the fact that even though she was in a miserable predicament with who-knows-what kind of hard life she had come from, she was wagging her tail. Wagging.

Maybe.  Or maybe it was ALL of that.

On this day, as a result of this picture, regarding this dog – she was going to live a beautiful life, because I was going to save her.

I had to look on the map to find out where Downey, California was.

Nevermind that I have never networked to save the life of a specific shelter dog before.

When you first go to rescue a dog, you think you have all the time in the world – at least that’s what I thought.  I was happy when the shelter gave her a name (Eloise), and even happier when others started sharing MY shares for her.  I felt this was going to be a piece of cake, and Eloise would be out of there before I knew it.

However, as the first few weeks buzzed by, Eloise wasn’t generating ANY interest at the shelter.  This was bad, because there are many shelters that are in-and-out, meaning, dogs are admitted, and within a very short amount of time, if no-one comes to pull or adopt them, they are euthanized.  And unfortunately, Eloise had landed in just this kind of shelter.

I started calling the shelter a few times a week, to find out if Eloise had found a forever family.  Each time, the answer was “no interest”.

This caused me great distress.  I ramped up my sharing, and along with that, found myself on the phone and computer, researching Southern California rescues, fosters, groups and veterinarians, trying to drum up some interest in Eloise.

Except, something. Out of my non-stop sharing and updates, more people began to take notice of Eloise. And that turned into a small group of very supportive and devoted individuals rallying together from different states to make a difference for this one lovely dog who nobody wanted.

By week three, the shelter took notice of this small group of people who took turns calling the shelter to check on Eloise.  Our persistence paid off, and Eloise’s first Due Out date came and went (the Due Out date is the date a dog in a shelter is scheduled to be euthanized). They postponed it because they were now aware that so many people on social media were sharing her.

There is so much to know about pulling a dog from a high kill shelter and transporting him/her via a network of caring people who volunteer their time, money, vehicle/airplane and life to doing this.  Some transports charge, others put you on a waiting list.  And then, if the dog’s time is up at the shelter, where do you board the dog until transport can start? And, if you are transporting to another state, what are the certifications, vaccinations and other paperwork needed to either accept the dog into another state, and into another rescue? And I thought it was overwhelming before these new discussions began.

But now I was not alone. I had Team Eloise beside me, literally, morning into late night, EVERY day, helping further the goal to get Eloise out of that shelter no matter what.

And then it comes, the final days before the next Due Out date.  This time, the shelter was firm.  We had two days. Two.

And on that first day of what would be Eloise’s last two days, we had a very unexpected blessing.

Two of us on Team Eloise reached out to the same Animal Rescue in California.  And both of us received a reply.

It was decided that I would call the Rescue, and that’s when it became too easy.  Just like that, they would go get Eloise, and take her into their Rescue.

I had to ask them to tell me again because it was so effortless.

The very next day, Eloise made her freedom ride to the start of her beautiful new life.

If you are one of the ones who are lucky enough to come across pictures of urgent animals in need, I assure you, there are not many feelings that top being able to do something to save or better that animal’s life.  Even if you have never done it before, I recommend making the effort to reach out to see what you can do to help.

I realize that not everyone can or will make the effort.  That’s a shame, because you will miss out on an extraordinary experience. It’s amazing to be part of something so wondrous as being able to save or better a life. And frankly, it’s our job TO reach out in compassion and help where and when we can.

Championing for Eloise was my pleasure and privilege.  It was not easy.  It brought an ever greater awareness of the plight of so many Eloise’s that never leave  the shelter, which made saving Eloise bittersweet.

I still think of Eloise as #Eloise, and it still feels strange not to be sending out social media reminders on behalf of her. I will take feeling strange over knowing that Eloise is in a good place now.

If you think you can’t do something, right there you probably can’t.  However, if you TRY, you will find out that you CAN, and that’s a pretty good feeling. 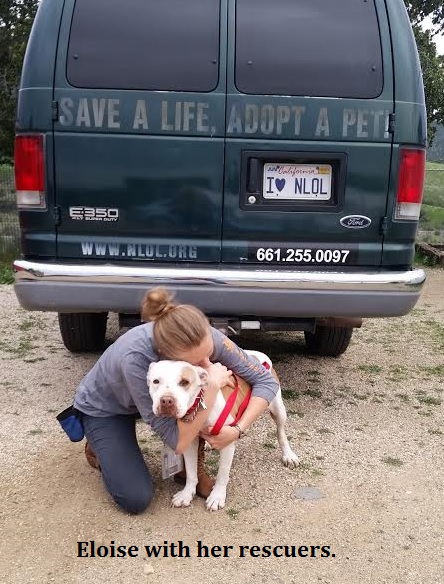 Pulling an animal from a shelter by a rescue group takes time and money, and many times, it’s volunteers to who do this. So much goes on behind the scenes that we never know about.  For Eloise, thank you to New Leash on Life Animal Rescue for offering to take her, at no cost to Just-Do-Something.org. They would not even accept us paying the adoption fee.

Thank you to everyone who took the time to share, and share, and re-share again for Eloise.  It helped make a difference.

One thought on “For the Love of #Eloise”