Guest Blogger, Kate Sheridan (A Voice For the Voiceless UK)

Trophy hunting is the hunting of wild animals for human recreation. Parts of the animal are often kept as a “trophy”, hence the name. Seems pretty obvious, but it shouldn’t be confused with the hunting of wild animals for meat, and definitely should not be confused with Canned Hunting. Although Canned Hunting can be described as a form of trophy hunting, not all trophy hunts are canned.

My sister wrote a wonderful post about trophy hunting in Africa for Let Rhinos Roam Free’s blog following his royal highness, Prince William’s interview where he defended the practise. In this interview, Prince William said “there is a place for commercial hunting in Africa, as there is around the world”. To put it simply, his argument is that if there is an old, infertile animal who is coming to the end of his life, and someone wants to pay a lot of money to shoot that animal, as long as that money goes back into conservation, then there is a place for it. I agree with this.

I do not support the trophy hunting of endangered species. Rhinos, elephants, leopards, lions etc. are not trophies. Cecil the lion was a particularly famous case, and made trophy hunting a household concept. Everyone knew about it and everyone was talking about it. What happened to Cecil was a tragedy that should never have happened, and should never be repeated. However the awareness it brought to the issue is invaluable. Of course I wish that awareness was already there and I believe the death of an animal should not have been necessary, but it was and at least the message was spread.Cecil, however, was a special case. He was lured away from the sanctuary, and tracked for 40 hours after his initial shot from a bow. This is inhumane to say the least, and was an illegal hunt. Therefore this case was always going to have a backlash, but it led people to attack all trophy hunters, which was misdirected. Not all trophy hunts are like this. There is a rule that if the client does not kill the animal after 2 shots, the guides/local experts must take over to put the animal out of his misery. How much this is enforced, I do not know, but it shows there are humane guidelines in place.

Prince William also indirectly points out the main difference between Canned and Trophy Hunting. The reason he gives for supporting some trophy hunts, is that if the money goes back into conservation, it’s beneficial. This is the only time he supports it, and I support it too. In almost all (if not every single one) cases of Canned Hunting, the money is used to fund Canned Hunting. It does no good for the lives of the animals, or the conservation of the species. It’s a money making business at the expense of innocent animals, and I can never support that.

I would like to point out, that I would never go hunting of any animal myself. It does not appeal to me, and I could never deliberately take the life of another living creature.
However, I do know that the trophy hunting of some game does bring in much needed revenue for conservation. For example, game such as some antelope species, which are not endangered. When animals of these species are old and infertile, as Prince William said, and people want to pay to shoot them, then it can be beneficial for conservation.

I’ve said it before, and I’ll keep saying it, we live in an economic world. Trophy hunting is not the ideal way to raise money, but it raises a lot of money that conservationists would struggle to find elsewhere. Without economic value, the status of so many animals would plummet. We have to consider the world we live in, and it’s driven by money. Do I wish it wasn’t? Of course I do, but sadly we have to face facts. This all ties into conservation vs preservation; conservationists know that trophy hunting raises much needed funds and so they will keep doing it until the money can come from other sources.

There is so much I could say on this. It’s such a broad and complicated topic. I will never support the hunting of endangered species. Under the Conservation Status charts, for me that includes anything that comes under threatened and near threatened. However, IF the money raised from the hunting of non-threatened species is used to benefit the lives of other animals and progression of their species, then I can support it. 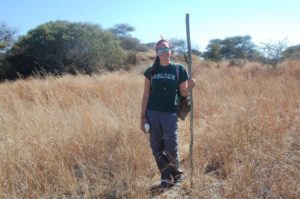 I’m a student studying geography (Bsc) at the University of Southampton at the moment and hope to travel the world and work in conservation afterwards. I have spent 1 summer volunteering in South Africa on a privately owned reserve doing research into scavengers with Earthwatch, and the next summer volunteering there where I was involved in lots of jobs including rhino monitoring and protection. I’ve also spent one summer volunteering at a Wild Cat Sanctuary in South Africa, where I looked after all kinds of Africa cats and learnt a lot about the barbaric practice of Canned Hunting. I learnt a lot about conservation in Africa on these trips, and fell in love with it. I’m going to finish my studies, and perhaps do further study in conservation or zoology, and continue to run my blog and hopefully then work in conservation. Connect with Kate on Twitter.

« Guest Blogger, Shelly Nunez (A Passion For Paws Rescue)
Because we are ALL animals (From Janet) »
View more posts from this author