“Holiday forgetfulness” strikes too many people when it comes to animals.

Despite the many warnings and articles highlighted in social media when it comes to animal safety  and the “do’s & don’ts” of holidays events – there are still those who might feel they and their pets are above all that, and continue to do dumb things that put our four-legged friends (and birds) at risk.

Today in Upstate New York, is a great example.  With temperatures almost hitting 90 degrees these past few days (as I type this, it’s 86), people have been out and about for the majority of the day, many with Fido in tow.  I saw one woman stop to open her water bottle for HER to take a drink, but she had nothing to offer to her poor, panting dog.  And they were BOTH walking in full sunshine.  A short while later, I saw one dog owner had put her dog in a costume because “it’s cute”.  Not to mention that the costume was of sweater (SWEATER) material.

PS – Both were addressed, because I spoke up.  Dog A received water, and Dog B had the costume removed.

But what if I didn’t say anything?

My point is that many people are wonderful animal owners.  But sometimes, when it comes to a three-day weekend, or a special holiday, stupid finds them and sticks with them.  So caught up are they in their socializing and their excitement in having that special day or extra day off (which includes showing off their beloved pet), that their choices become poor ones when it comes to the animals they are responsible for.

I honestly feel that’s it not a difficult thing for an animal owner to put some thought and consideration into how they will be celebrating a holiday event while making sure their pet is taken into consideration.  It takes MORE time to deal with the results of a scared, sick or run-away pet.

With so many animals WITHOUT owners, how blessed are those that have a family.  But it’s up to that family to take care of them, and plan for them.

Common sense goes a long way, if you are not in the throws of Holiday Forgetfulness.

If you see someone where stupid has found them and stuck to them this Labor day holiday, please speak up.   An animal’s life may depend on that. 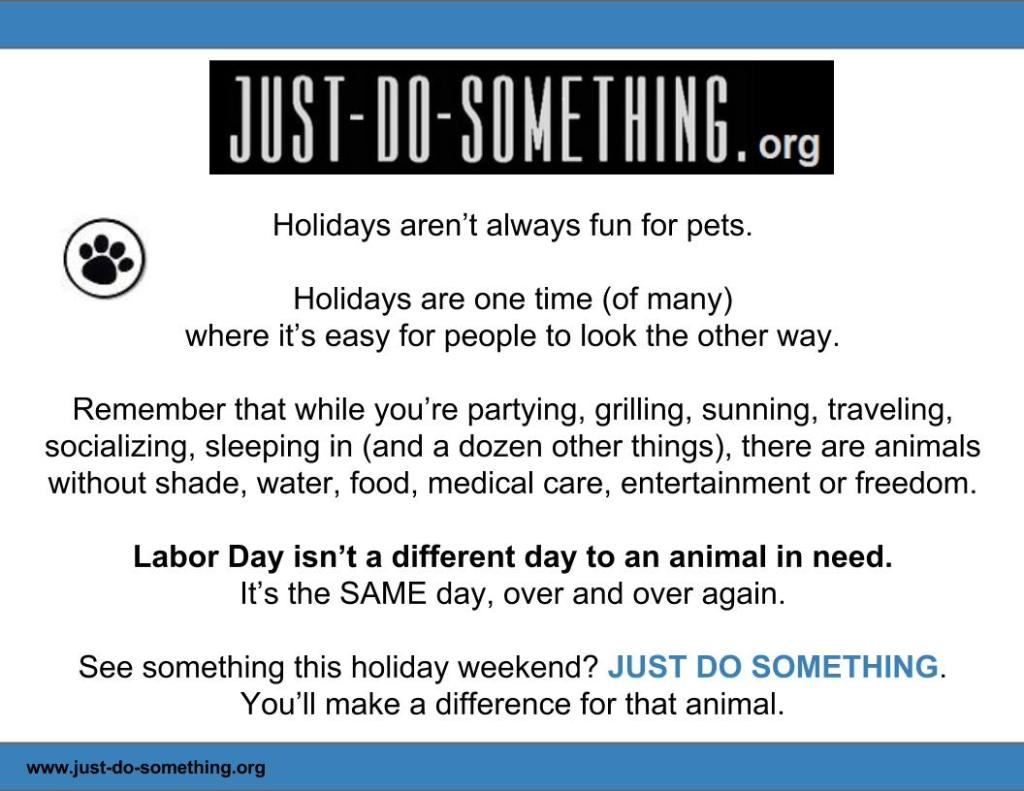 « Guest Blogger, Respect and Connect
I’M HOME! (From the new parents of #Eloise) »
View more posts from this author