When is a cow JUST a cow? (From Janet)

This past weekend a bunch of us were heading to Niagara Falls, taking the scenic route so we could take our time and enjoy any nature we were lucky enough to spot along the way.

The drive was pretty relaxing, until we drove by a field with two dairy cows in it.  The farm grounds were clean, all the dairy cows looked healthy, and the livestock had access to the barn and to the outside.

Until we drove past the barn.

In between the main barn and the residential house, was a small field, no shade, and two dairy cows.

None of us are cow experts, however it was apparent that both cows were having trouble trying to stand. And, it was h-o-t.

Not sure of the situation, or sure of what we were seeing, we decided to continue onto the Falls, but take the same way home so we could see if these two cows were still there.

Nine hours later, the cows were still there.  One was able to walk, but the one larger cow seemingly hadn’t moved from the place it had been laying when we first spotted her.

That was enough for me to want to inquire about this cow.

I get that not everyone is the same as me when it comes to championing for animals.  I will champion for ANY animal, and be loud about it and/or persistent if I have to. I don’t expect everyone to be like me in this area, however, I DO expect that those who know me understand that they can stand in the background, but *I* will not.  So, we pulled over so I could go up to the barn and speak to someone.

I was told that both cows were put in the field the day before, because they had fallen in the barn and injured themselves. A cow can fall a certain way where their legs go out from underneath them, splaying straight out from their side, tearing tendons and ligaments.  Sometimes the cow is able to recover, but it takes time, and often, it takes effort on the part of the cow owner because the cow needs help getting up and needs support in moving around. This often requires supportive bandages and hoists.

I was told that both cows were put in the field because they did not want them to be injured further by being stepped on by other cows, and they wanted to give them room to quietly rest and stretch out so the owner could see the extent of their injuries.

I remarked about the heat.  I stated that no injured animal should be left to spend hours in one place in the sunshine without shade.

The cow farmer was not concerned, citing that the cow would have cooler temperatures when the sun set.  That explanation was not good enough for me.  I took a picture of Downed Cow, noted the address, and marked down the mileage from that location to my house.

Unfamiliar with that county’s Animal Control Department, I decided to make some additional calls when I got back home.

In any county, Animal Control and/or Animal Cruelty have only so many hours in the day to follow-up on abuse and neglect calls.  Obviously, some situations take precedence over others, but ALL calls need to be addressed.  There are specific guidelines these governed entities are required to follow, based upon domestic and non-domestic animals.

Smaller counties do not always address all animal concerns.  As it was for this county, their local Animal Control only dealt with domestic dog issues – mainly license problems.  The bigger issues were handled, happily enough, by our county’s SPCA Animal Cruelty Division.

To me, sometimes it doesn’t matter WHO handles the call, as long as the issue gets addressed.  I was determined that the cow was going to be looked at the very next day, and that meant more than a few telephone calls to ensure it happened.

No-one initially seemed too concerned about one downed cow in the middle of a field, until I mentioned a confirmed injury and lack of ready-available water (lack of water is considered animal cruelty, however leaving livestock outside without shade is not always an issue – go figure).  Shade falls under the category of “sustenance”, and there is a fine line with that.  One Animal Cruelty Division may take that into consideration, another may not. I pressed on this issue also.

By late afternoon the next day, Downed Cow had been visited by a NYS Trooper Division where one of the State Troopers actually owned a working farm, and by a member of the SPCA Animal Cruelty Division.  It had been confirmed by both visitations that earlier that same day, upon examination, Downed Cow broke her hip in the fall.  As a result, the cow was euthanized.

I can’t help but wonder if Downed Cow was put in the field because they already knew she was not going to make it.  I have often heard about other situations where an injured cow is simply put aside until it can be taken care of (killed) at a later time. This would explain why no-one bothered to provide her shade or a comfortable, safe spot in the barn away from the other cows.

Regardless, Downed Cow is out of her misery – out of the heat, out of pain from a severe fall that caused a devastating injury.  I am including her picture because I wanted her to be noticed, and thought about. So many are not.

Wondering about the other cow that was also in the field? She was sent to slaughter. And sadly, so it goes. 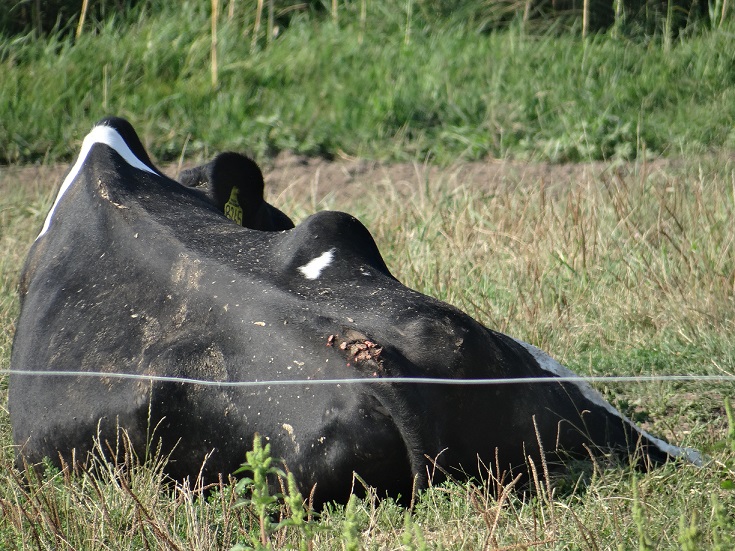 I was told that the farmer was upset because they lost a good $1,200.00 cow.  What was that cow to that farmer? Money.

How sad that so many of us have stopped looking at cows just because they are big, beautiful animals who deserve to be exactly what they are.

So, question – when is a cow just a cow?

Answer – when WE allow them to be just that.

If YOU see a situation involving a farm animal that needs attention, make sure you have the address, nearest crossroads, county (if possible), name of farm (if possible), and any pictures you might be able to take.  If you are not getting anywhere with local authorities, first, contact a State Trooper.  They have jurisdiction many times that local 911 does not have.

Also, you can call the US Department of Ag and Markets at this number: 518-457-3502, prompt 0. Tell the receptionist that you want to report abuse of a farm animal.

Want more information on Factory Farming issues? Take a moment to go to Mercy For Animals.

And remember, if you see something – please, JUST DO SOMETHING.  It matters.

One thought on “When is a cow JUST a cow? (From Janet)”

Leave a Reply to J B II Cancel reply